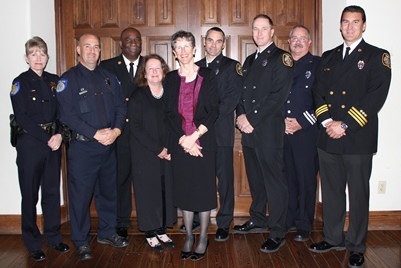 Each spring, the daughters of Sally and Hubert Mee return to Sacramento to carry on an important family tradition: honoring heroes from the Sacramento Police and Fire Departments. For years until their passing in 2007, Sally and Hubert Mee hosted a special event for those who keep us safe to honor heroic and meritorious acts and recognize the heroes with financial awards. The awards program was made possible through the Sally and Hubert Mee Fund, which the Mees established in 1994.

Heroism was important to the Mees. As a young man, Hubert Mee had worked as a lifeguard. During World War II, he swam a wounded fellow seaman to safety during the sinking of the USS Quincy at Guadalcanal. “His experience as a hero, and seeing other acts of heroism, gave my dad a lifelong appreciation for actions that saved lives,” says daughter Nancy Mee. She and her sister Catherine join other family and friends at Hubert’s beloved Sutter Club for the annual Mee Awards.

Each heartfelt ceremony is an opportunity to give tangible thanks to Sacramento’s police and fire officers for their valor in protecting the public. The endowment for the Hubert and Sally Mee Fund ensures that the awards will continue in perpetuity: so long as there are extraordinary acts of bravery, there will be Mee Awards to recognize them.

We enable people like you to customize their philanthropy, easily and effectively supporting the issues they care about – now and always.

MAKING AN IMPACT TOGETHER

Because of our fundholders' support, the Foundation has made strategic investments in the nonprofits that serve the Sacramento region.